This site is dedicated to the celebration and memory of Lindsay’s life.

The Lindsay Rachel Giacomelli Memorial Fund was established in Lindsay’s name as a memorial to her short life (June 18, 1984 to March 18, 2005). The goal of the fund is to keep Lindsay’s name and presence alive and to reflect her generous and caring spirit and to provide charitable grants to Calgary and Alberta area causes forever, all in Lindsay’s name.

The Fund was conceived by Lindsay’s Grandfather (Grandpa Bill) on March 21/22, 2005 when the family and extended family were gathering at her parents’ home and preparing for the memorial service to be held on March 23, 2005. (That date was Holy Wednesday of Easter Week 2005. In 2016 that same day and date occurred, 11 years later, and will next occur in 2157). At the time, they had no idea or plan for the Fund, but it was created through the Calgary Foundation.

The first fund raising event was an impromptu golf tournament. As Lindsay’s birthday of June 18, 2005 approached, her Dad phoned his good Buddy Dave up and said”…hey why don’t we get a few guys out for golf on Lindsay’s birthday, and get me out of the house, and maybe raise a few dollars for the Fund?”. The answer was”…already organized and waiting for you to call.” With that first tournament we had 56 golfers and raised $11,000 for the Fund, and have never looked back. In each subsequent year from 2006 through to 2015 the golf tournament became formal, and was held as close to June 18 (Lindsay’s birthday) as possible. Golf in June is questionable. Either rain or snow or both and rarely sunny. We lucked out though, and actually had many sunny day events. Each year the tournament was sold out with 128 to 144 golfers and 150 to 160 people at the follow-up dinner and silent auction. There was great support from all. In the final 3 years (2013-2015) the tournament was fully committed with 144 golfers before the end of January of the respective year, with 25-26 corporate sponsors. The event raised $45K, $48K and $51K in those final years 2013 to 2015. At the conclusion of the 2015 golf tournament the Fund was at almost $500,000 value.

The 2015 tournament was the 11th and final (for a while). It was time to try something new before we get old and stale. Maybe we’ll resurrect it on the 15th or 20th anniversary/maybe not. In 2015 we also had what was “the inaugural Dragonfly Barn Dance” on Saturday following the tourney that year, with invitations to long time tourney participants and sponsors, with 110 people attending. In 2016 we repeated with 169 people, 158 people in 2017 and 213 people in 2018.  The 2019 Barn Dance was held on Saturday July 6, 2019. It was an outstanding day with plenty of sun, a little rain, and 218 people attending. The 2020 and 2021 Barn Dance was cancelled due to Covid, but we are planning for a final blowout Barn Dance in 2025 and celebrate the hard work Lindsay has done these past 20 years and perhaps a Fund value at $1 million. Stay tuned. We will see.

Thanks to your generous support since 2005, we have granted $230,285 directly from the Lindsay Rachel Giacomelli Memorial Fund and an additonal $53,000 from the golf tournament platinum sponsors ( total $287,285) to the various charities listed below, AND we have built up Lindsay’s Fund to approximately $717,423 as of March 14, 2022. That means approximately a $28,697 charitable grant will be available in 2022.

The Lindsay Rachel Giacomelli Memorial Fund is an endowment fund administered by the Calgary Foundation. All contributions to the fund remain at the Foundation forever. Each year 4.0% of the fund’s value is used for a charitable grant to a local cause. Tax deductible gifts to Lindsay’s Fund are graciously accepted by the Calgary Foundation on-line at: https://payment.csfm.com/donations/calgaryfoundation/index.php. 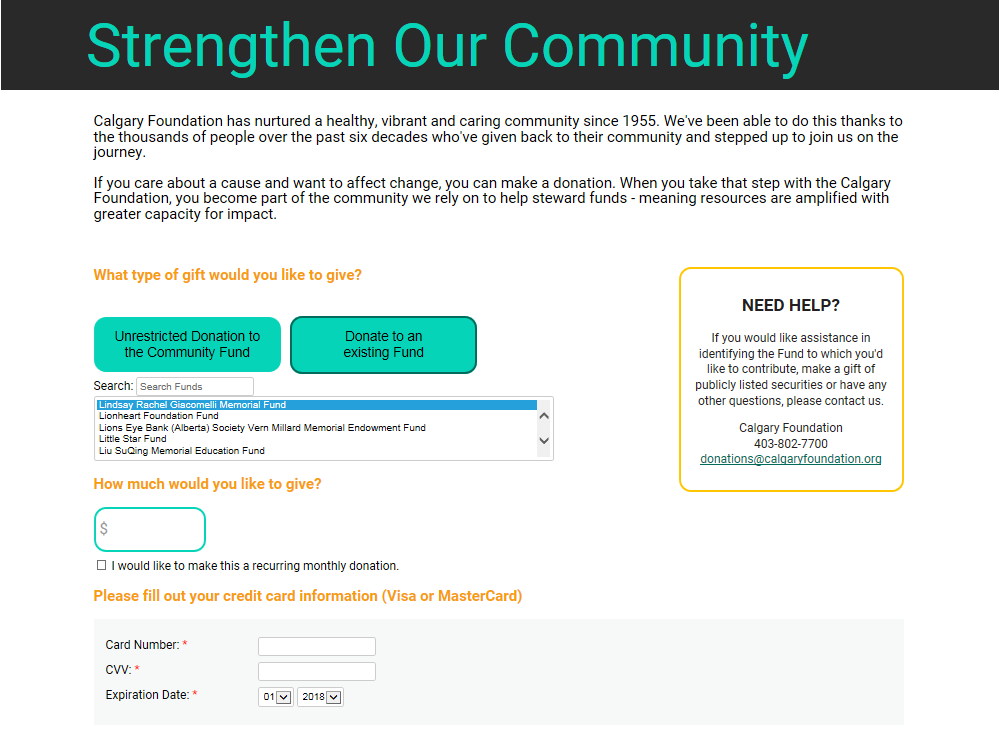 Grants over the various years have been made to:

Since 2018 most of the annual donations have been supplemented by an additonal 50% value due to the generosity of the Shaw Charity Classic. The establishment of this fund provides our family extreme comfort in the knowledge that the fund will provide charitable donations to Calgary and Alberta area causes forever, all in Lindsay’s name. We are extremely grateful to all participants in every aspect of the tournament, the barn dance and the Fund.